Mono LL3402 / Stereo PS 402
The second US LP, 12×5 was also pressed in UK by Decca for export to US. The records were put into inner bags and shipped to US. They were then put into original US made sleeves on arrival.
This album was not released in England until the 1980’s.

The very first copies of this one made in England has a cover with the same picture as the first LP, Rolling Stones No1 LK4605, with additional text Rolling Stones 12 x 5. The reason for this was probably that the final cover design was not ready yet when the first LP’s were pressed. The cover was then quickly changed into the correct official us 12X5.

Front and back of the first “Demo” cover. Both Mono and Stereo versions are existing of this “demo” cover. 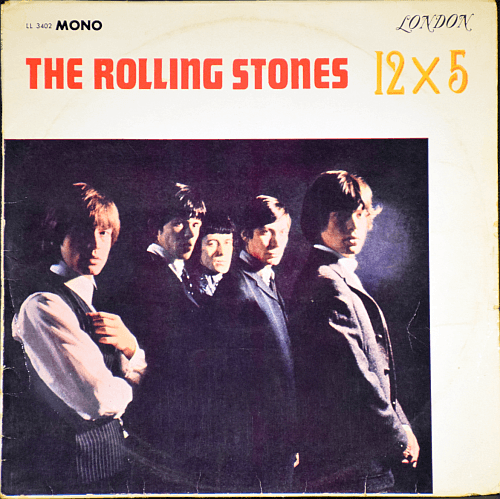 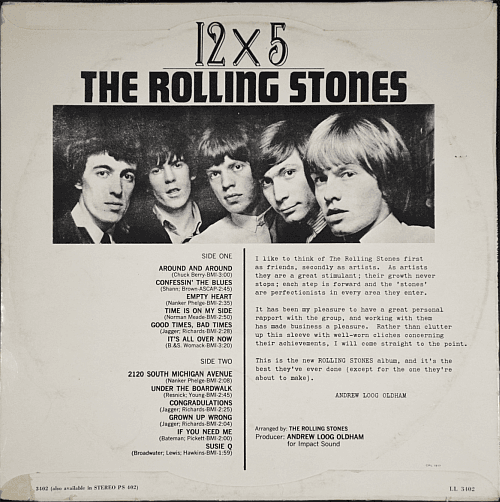 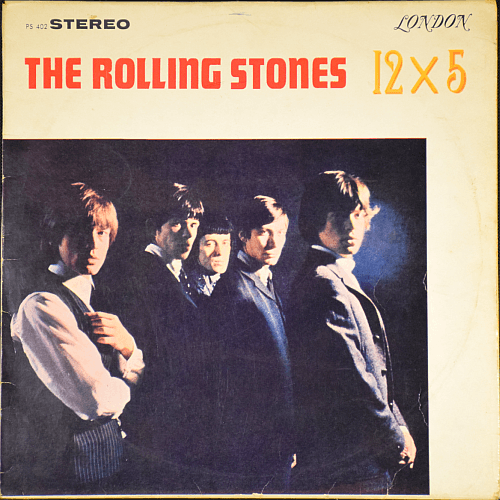 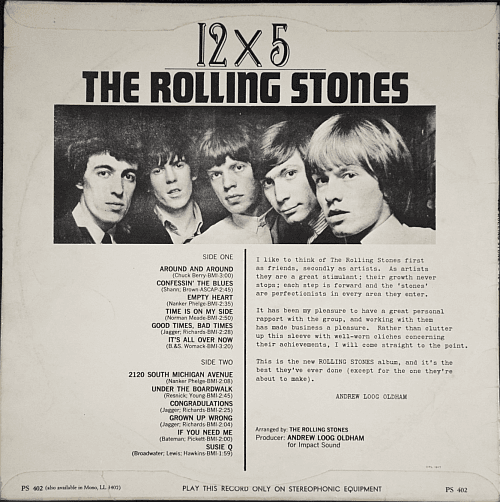 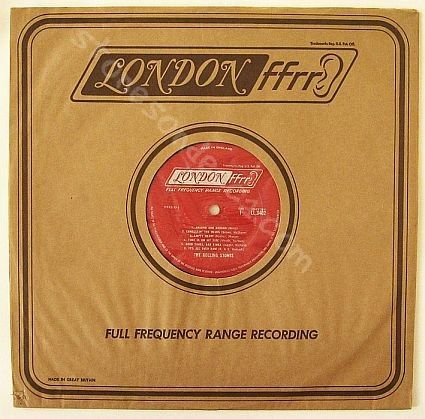 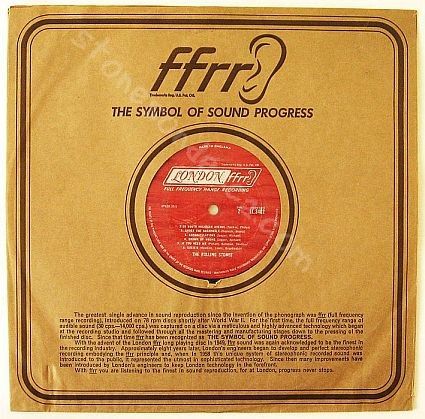 Some of the early LP’s with the first test cover version did also come with the original Decca inner bag. 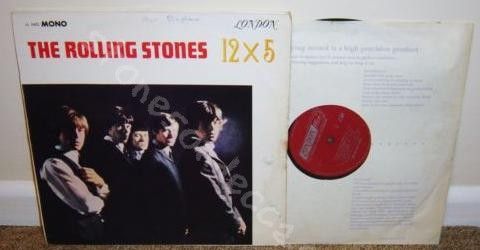 A few label versions are existing of 12×5. Both the short and long versions of “Made In England” can be found. 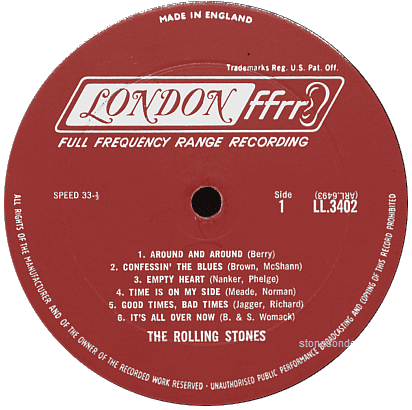 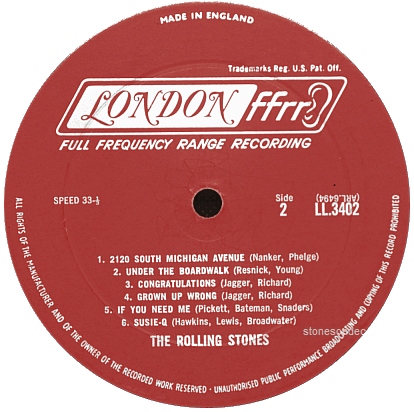 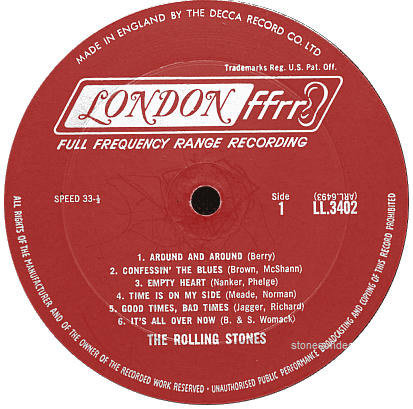 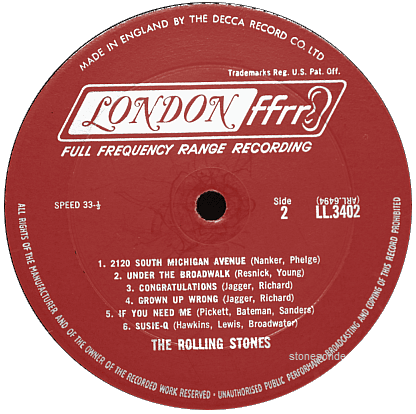 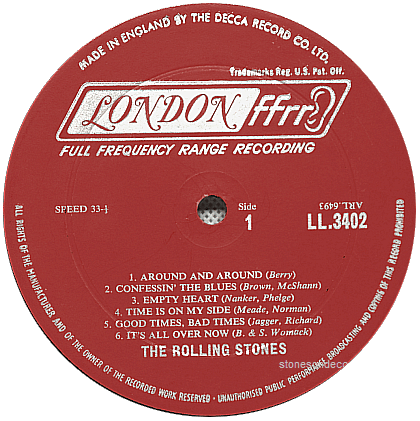 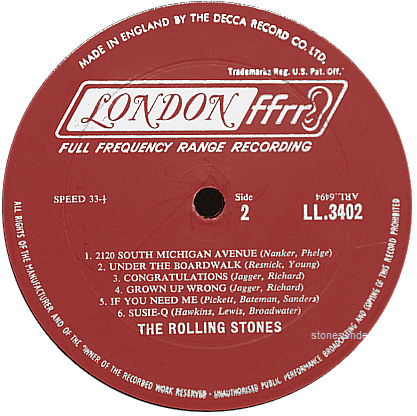 Made In England as top text. 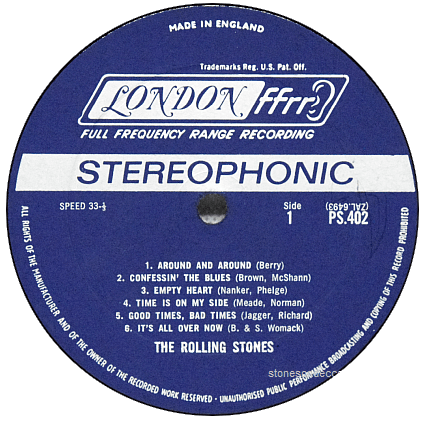 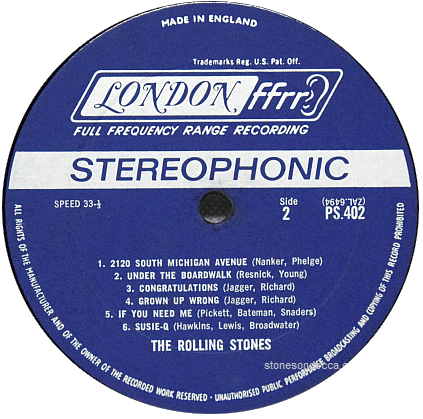 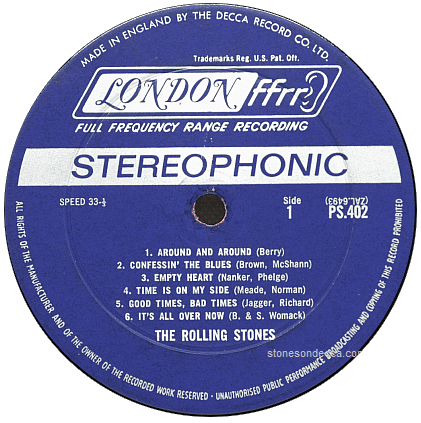 The album 12 x 5 was released and sold for the first time in England in 1984 as pert of Decca / Polydors re-release of old Decca albums. The album got a new catalog number, LKD 5335, and the standard new label used on all the 1984 releases. 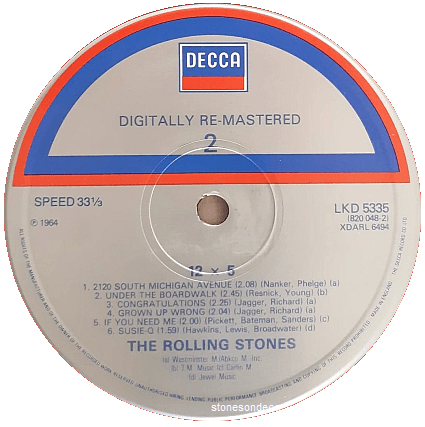 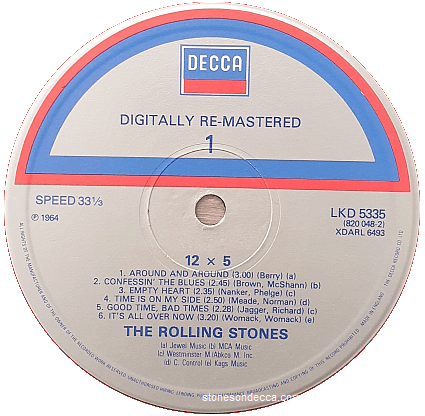 More on the cover

The Australian records with demo sleeve

The album 12 x 5 was also sold in Australia with the test cover version. Both mono and stereo versions were available.
The catalog number was adjusted to fit the numbering system used in Australia.
Mono LKA 7591
Stereo SKLA 7591
Sleeve printed in UK and pressing plates are probably also made by Decca i UK, This needs still to be confirmed. 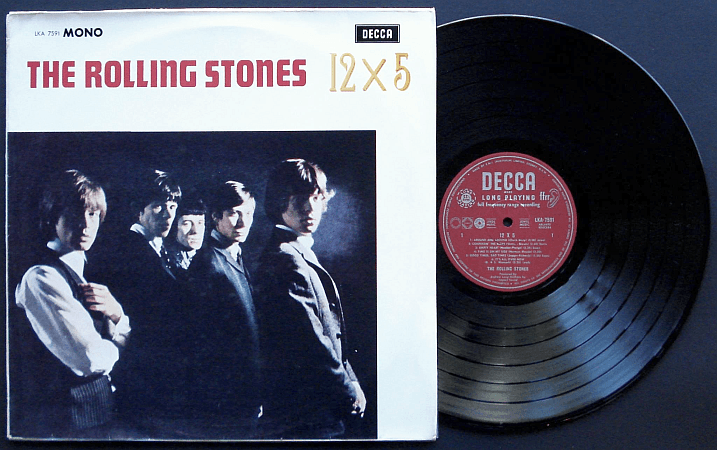 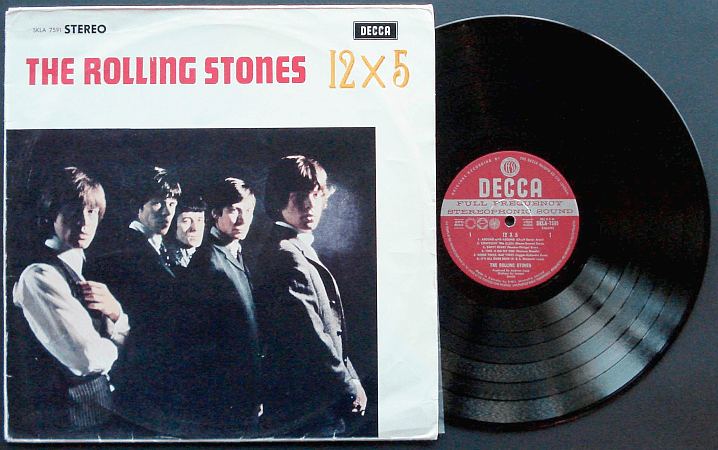 Back side of the Australian sleeves.

The only differenser to sleeves used for UK pressed records is then the catalog number being the ones used for Australia. 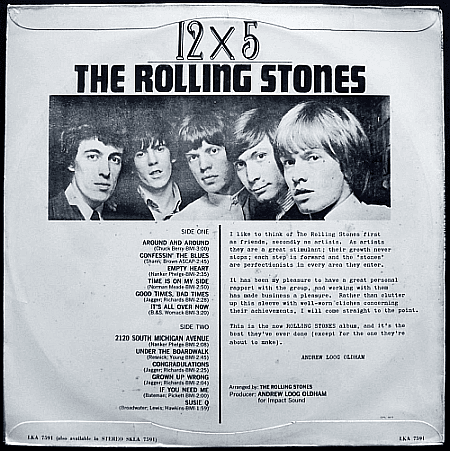 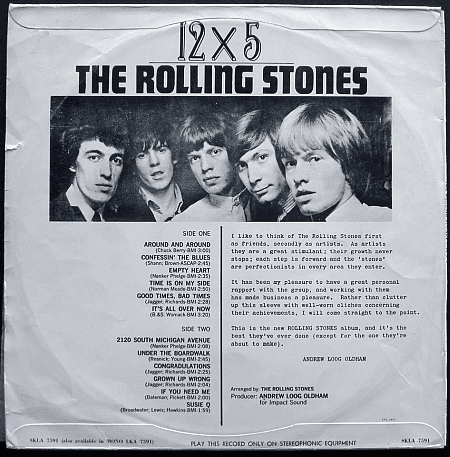 The British and Australian test sleeves were printed in England

The sleeves for the Australian version were printed in England at the same printer that did the sleeves with USA catalog numbers.

The 12×5 test sleeve has a special cutting. The same cutting can be found on sleeves made in England in the late 50’s and early 60’s. This is the very first stereo album ever released by Decca, “A journey into Stereo Sound” SKL 4001 released in 1958

This is a Capitol / EMI record by The Five Saxes from the end of the 50’s. Exactly the same cutting as the Decca album SKL4001. The sleeves were made by the same printer and this is the printer that Decca also used in 1965 for the test version of 12×5.

Thoughts around the demo cover

Manufacturing, distribution and sales of the test cover

The Test cover for the 12×5 record is today one of the rarest Rolling Stones records and the original purpose of the cover remains still today, almost 60 years later, very much unknown. When, why, where are questions we do not have answers to.

The Test cover version was made in a very small amount. There are many theories on where the sleeve was printed, on where it was sold as new and was the Test cover manufactured before or after the stock cover? We simply do not know as no facts on this has surfaced. But looking at the sleeve and assembling information from the internet and other sources for many years, this would be my theory. I still stress the word theory as we do not know the facts.

Where was the Test cover printed?

To begin with, let’s look at the sleeve. There are sleeves used for both British Decca and EMI records in the end of the 50’s and beginning of the 60’s that has the same cutting as the Test sleeve. We do not know which company made the sleeves, but as the same style and cutting is found on many albums made in England at the time, then the manufacturer must be in England.

By looking at the back of the sleeve, we do find the small number CPL 1917 on all Test covers. This confirms that both the Australian as well as the British sleeves were printed at the same location and that must be England.

The paper quality on the Test 12×5 looks to be almost the same as on many stock EMI and Decca album’s having the same cut. Only difference is that all early stock sleeves are laminated, and the Test cover is not laminated. The lack of lamination on the Test sleeve may also indicate a “rush and cheap” situation.

Why did they make a Test cover and did the Test cover come before or after the stock sleeve?

In my opinion there is no doubt about which one came first. The Test cover must be the first one used. My theory why, would be this:
The likely scenario was that the master tape for the new 12×5 record was ready, and the production of records was started. By this time, they did not have a suitable front picture for the new album. The back of the cover was designed and to be able the get the records distributed as fast as possible, they opted for using the same picture as used on the first album. We all know how busy the band was in the end of 1964 and there was simply not enough of time to arrange a photo session to get the new front picture arranged and taken.

Contradicting this is the questing why Decca UK would be involved in the manufacturing of the sleeve as they only shipped export pressing records in inner bags in 1964 and 1965? Perhaps a hasty made decision to make sleeves, but they were not used initially? Decca never threw anything away and the sleeves were used a few months later?

We also have the spelling mistake on “Congradulations”. This was already present on the test cover and the mistake was just carried over to the stock back cover as perhaps no one noticed the spelling error. The same error continued to be in production on all re-releases into modern days. The song title is correctly spelled on all record labels from day one.

Where was it sold?

This is the most difficult part to get confirmed. We simply do not know. But there are a few indications that can give us some ideas. Some of the 12×5 Test cover records being sold on e-bay have been located in the Netherlands, the UK and the USA. But that does not confirm that they were sold in these countries as new. Collectors do tend to purchase records from all over the world and then re-sell them. These three countries are well known for having lots of record collectors.

Decca did never export records in sleeves to the USA. All records were put in inner bags, sent to the USA, and there only put into locally made sleeves. Why would Decca do an exemption for a few 12×5 records? Based on this, I would think that the Test cover was never sold as new in the USA.
12×5 was essentially an American London record and records from the American catalog were never on sale in most of the parts of Europe in the 1960’s, including England and the Netherlands.

I have also seen one or two copies for sale located in Singapore! The seller of one item did also claim that the record was sold as new in Hong Kong! The Rolling Stones gave two concerts in Singapore on February 16th, 1965, and then one concert in Hong Kong next day. There were no Stones singles or albums made in Malaysia or Singapore back in 1965, Singapore being part of Malaysia in the mid 60’s. Hong Kong did make singles, but no full-length LP’s. What if the Test cover made a few months earlier were re-used and sent to Honk Kong to promote the concerts and fulfil the demand for Stones music in this part of the world in early 1965?

I am very much looking forward to facts and opinions. Please do contact me.