The off groove or dead vinyl markings on old Decca LP’s gives a lot of interesting information and by investigating and understanding these number, You can improve your knowledge of the LP. The identification of these numbers and letters will give you an indication of the age and version of the LP’s in your collection. The markings are directly related to the manufacturing process.

A big thank you goes to Mr L aka George Bettyes who has kindly given me lots of information.
He worked as a Disc Mastering Engineer at DECCA Studios from 1957 to 1972 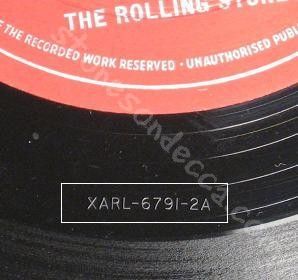 This number can be found at 6 a clock on the vinyl. A typical number can look like this:

The number can then be broken up in a few pieces that carry different information like this:

XARL – This stands for a Mono recording. If you have a Stereo recording, then the numbers would be XZAL. Some Stones albums are missing the X letter. In that case an ARL is a mono album and ZAL is a Stereo album

For some reason they did not change the master file number even though the contents was change. An example of this is that both short Tell Me and long Tell Me on side two of the first Stones album has the same number, 6272

A – This is the letter identifying the engineer who created the Master Lacquer and supervised the whole process up to the stampers. I have been able to get a confirmation on the names behind all letters used by Decca. The confirmation was given to me by one of the men who actually did the job, Mr L aka George Bettyes. This information has then been copied on to numerous internet sites.

Matrix numbers on LP’s: As you already know the matrix numbers on LP s were engraved ARL 1234 1A or 2A etc. If the record needs to be remastered it was usually recut by the original engineer. The person who had cut the record may not be available so someone else may have to recut. Then he would put his identity letter on the lacquer. The matrix number would then read ARL 1234 1L because this would be the first time this engineer had cut this record. If it was recut again the identity letter would either be 2L or 3A depending who cuts it.

The engineers had their “own” LP’s to take care of. It was usually the same cutting engineer who did a new cut if a new Master Lacquer was needed. Decca had also dedicated Mono cutters who only took care of Mono records. Guy Fletcher has done almost all Rolling Stones mono LP’s. Stereo records were cut by several engineers.

The albums were mainly cut by the following persons:

Decca used to identify a new mix by adding the code T2 and Satanic is the only LP that has been cut and pressed from two different mixes and where it is possible to confirm this through the matrix numbers. This way of working was common on 7” single records, they had T1 indicated that it was Take 1 of the title. If the producer rejected the take he would remix the track and then it becomes Take 2.

A LP that do not have the T2 in the full matrix numbers is a true mono mix. If the LP has the T2 code, then it is basically a stereo mix that has been folded down to one channel for mono sound. You can actually hear the difference in between a “non T2” true mono pressing and a T2 stereo fold down to mono pressing. Take the song “The Lantern” for example, there is a bell tolling in the beginning of the song:

A fold down from stereo to mono AND a real stereo LP has the bell tolling two times before the music starts. (matrix ARL or ZAL-8127-T2-##)

This number can be found approximately at 9 a clock on the vinyl. The number is sometimes difficult to se, but it is there. This is the number of the Metal Mother used to make the Stamper. The highest number I have found to date is 5. Most of all LP’s has either 1 or 2. You may also sometimes find combinations of two numbers. The reason for double numbers is not known to me. Some of the mother numbers do also include letters, usually B. The reason for this is not either known. In general it can be said that the lower number you find, the earlier Mother is used.

The number in this picture is 1

The letter identifying the Stamper can be found at 3 a clock on the vinyl. The letter is sometimes difficult to se, but it is there. Decca used the word BUCKINGHAM for numbering of the Stamper. The first Stamper to be made from the Mother has the letter B, the next one has U and so on. You may also sometimes find combinations of two or even three letters. Numbering logic goes like this:

Some vinyls can have the code SM plus a letter on the left side of the matrix number. This indicates that the pressing plate is manufactured by an external company. SM probably stands for the company name.
Decca did most of all the plates in-house, but some of the Stones LP’s sold in very large quantities and their own plate production could not keep up with the demand so an external company supplied plates for some LP’s.

Most of the Decca records has also a tax code around 12 a clock on the vinyl. This tax code is not any specific Decca code but the official code used in UK before 1973 to determinate the purchase tax %. Sales or VAT tax was taken into use in 1973

If the tax code is missing, then the LP is pressed after April 1st 1973.

The dates mentioned are the official dates when the codes changed. There may be a slight overlap as it is not known how fast Decca did change the stampers to have the correct tax code. Some LP’s do have a double coding, both JT and KT on the same vinyl. These LP’s may have been pressed just about the time when the code change took place, November 1968.
You may also find that the Tax code on the label and the vinyl may be different. 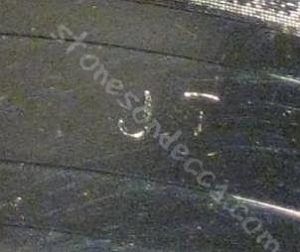 Things to consider when collecting Matrix numbers and first pressings

Most of the time it is impossible to determine if a record is a first or later pressing only by looking at the matrix and stamper numbers. Thousands and again thousands of pressing plates were manufactured for Rolling Stones records in the 60’s and 70’s. There was no process or need of controlling which plate combinations were used for the production, other than checking that one plate is for side one and the other plate is for side two. You will find a lot of Matrix number combination on the same record and it is more common to have different cutting number combinations on the same record than having for example the same -4W / -4W on one record. At least for high sales volume records.

We can take Let It Bleed as an example. I have 18 stereo Let It Bleed records and only one of them has the same cutting number on both sides. The album sold in large quantities during the first year after release. The initial pressing of at least 200.000 records would have required more than one hundred plate pairs. The plates were never stored in the warehouse in cutting number or plate number order. The engineers just got the next plates from the stack in the warehouse when new plates were needed and continued the record pressing. I have a non-boxed Let It Bleed with cutting number -6W and a boxed record with -1W. Which one came first?

The opposite example can be the mono Out Of Our Heads export record, LK4725. This record was not manufactured in any large quantities. I have for example a copy with a non-grooved label that still has a -1A cutting number. Non-grooved pressings started to come out from the factory in September – October of 1968. One of my original pressings from 1965 is on a grooved label and do also have -1A cutting number. So almost four years after the first pressings they still used a stamper originated from the first -1A cutting. So, which came first of these two records? I cannot tell them apart based on the cutting numbers in the matrix, but I do know which one is an earlier pressing, based on the groove under the label.

The conclusion must be that you cannot confirm when a record has been pressed only by looking at the Matrix numbers. You need to take all other indicators into consideration.